EPIC has filed a lawsuit to suspend the deployment of body scanners at US airports, pending an independent review. Body scanners produce detailed, three-dimensional images of individuals. Security experts have described whole body scanners as the equivalent of "a physically invasive strip-search." The Transportation Security Administration operates the body scanner devices at airports throughout the United States. On July 2, 2010, EPIC filed a petition for review and motion for an emergency stay, urging the District of Columbia Court of Appeals to suspend the Transportation Security Administration's (TSA) full body scanner program. EPIC said that the program is "unlawful, invasive, and ineffective." EPIC argued that the federal agency has violated the Administrative Procedures Act, the Privacy Act, the Religious Freedom Restoration Act, and the Fourth Amendment. EPIC cited the invasive nature of the devices, the TSA's disregard of public opinion, and the impact on religious freedom.

Post-September 11, airline travel security has invoked the increased use of technology and better training of security personnel as a means of improving travel security. Some of these proposals, such as improved training for airport screeners, checking all bags for bombs, strengthening cockpit doors, and placing air marshals on flights, do not implicate privacy interests and are sound security measures. Others, however, present privacy and security risks to air travelers because they might create data files directly linked to the identity of air travelers. These files if retained could provide the basis for a database of air traveler profiles. The Transportation Security Administration utilizes two technologies to capture naked images of air travelers - backscatter x-ray technology and millimeter wave technology.

In 1895 x-rays1 were discovered by Wilhelm Röntgen.2 This discovery of how to look through an object to observe details beneath has advanced to include new techniques. One such technique called "backscatter" X-Ray is based on "the emergence of radiation from that surface of a material through which it entered. Also used to denote the actual backscattered radiation.3" 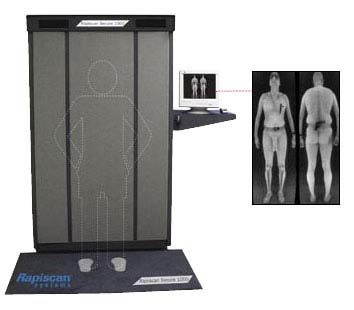 The application of this new x-ray technology to airport screening uses high energy x-rays that are more likely to scatter than penetrate materials as compared to lower-energy x-rays used in medical applications. Although this type of x-ray is said to be harmless it can move through other materials, such as clothing.

A passenger is scanned by rastering or moving a single high energy x-ray beam rapidly over their form. The signal strength of detected backscattered x-rays from a known position then allows a highly realistic image to be reconstructed. Since only Compton scattered x-rays4 are used, the registered image is mainly that of the surface of the object/person being imaged. In the case of airline passenger screening it is her nude form. The image resolution of the technology is high, so details of the human form of airline passengers present privacy challenges.

Airport security has undergone significant changes since the terrorist attacks of Sept. 11, 2001. Recently, the Transportation Security Administration (TSA) announced a proposal to purchase and deploy "Whole Body Imaging" X-ray machines to search air travelers at all airports. TSA said it believes that use of the machines is less invasive than pat-down searches. However, these machines, which show detailed images of a person's naked body, are equivalent to a "digital strip search" for all air travelers. This proposal, along with the agency's controversial plan to profile air travelers, shows extraordinary disregard for the privacy rights of air travelers. The Department of Homeland Security is requesting $72 million to invest in detection systems, which includes funding for the backscatter machines, which cost between $100,000 and $200,000 each.

The backscatter machines use high-energy X-rays that are more likely to scatter than penetrate materials as compared to lower-energy X-rays used in medical applications. Although this type of X-ray is said to be harmless, it can move through other materials, such as clothing. When being screened, a passenger is scanned by high-energy X-ray beam moving rapidly over her body. The signal strength of detected backscattered X-rays from a known position then allows a highly realistic image to be reconstructed. In the case of airline-passenger screening, the image is of the traveler's nude form. The image resolution of the technology is high, so the picture of the body presented to screeners is detailed enough to show genitalia. These images are not necessarily temporary - screeners can save the body images to the system's hard disk or floppy disk for subsequent viewing on either "the system monitor or on any IBM compatible personal computer with color graphics."

The Transportation Security Administration claims that is not storing detailed images of passengers screened by the system. The agency also states that it is providing a screening option for passengers who object to screening by the technology. However, the technology is designed to accomplish what has been described on this page, and until the process of assuring that the claims of the agency are enforced--questions will remain about the use of the technology. EPIC will make available on this page aviation security and privacy -related documents it obtains from the government under the Freedom of Information Act law about the adoption of "backscatter" x-ray technology intended for use in screening air travelers.

The stated goal of these new proposals is to rely on technology to reduce the "hassle factor" in airports and to reduce security threats. The core idea is to focus security resources on suspicious travelers, while ensuring that most people are not inconvenienced by heightened security. Terrorists, however, have been known to go to great lengths to look like most people. Will a technology that will capture detailed images of potentially all airline travel passengers lead to greater safety? Current technology can successfully detect dangerous substances, firearms and other weapons without backscatter x-ray imaging of passengers. Can the goal of safe air travel be reached without reproducing a digital image of a passenger's body? It has long been recognized by security experts that it is impossible to eliminate all threats to airline travel. Is the application of "backscatter" x-ray technology a deterrent and not a solution to perfect airline travel safety? If this is true, then is the trade off in passenger privacy worth the effort to deter terrorists? The application of security technology and increased passenger screening has also resulted in an increased detection of non-violent criminal offenses. Is the application of "backscatter" x-ray technology to screen airline passengers more than just a means of detecting terrorists?

In 2009, the TSA announced that Whole Body Imaging would replace metal detectors at airport security check points. This is a marked departure from the earlier promises by the agency that the technology would only be used for secondary screening of air travel passengers.