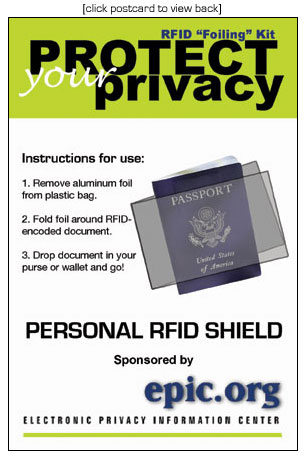 Radio Frequency Identification (RFID) is a type of automatic identification system. The purpose of an RFID system is to enable data to be transmitted by a portable device, called a tag, which is read by an RFID reader and processed according to the needs of a particular application. The data transmitted by the tag may provide identification or location information, or specifics about the product tagged, such as price, color, date of purchase, etc. The use of RFID in tracking and access applications first appeared during the 1980s. RFID quickly gained attention because of its ability to track moving objects. As the technology is refined, more pervasive-and invasive-uses for RFID tags are in the works.

In a typical RFID system, individual objects are equipped with a small, inexpensive tag which contains a transponder with a digital memory chip that is given a unique electronic product code. The interrogator, an antenna packaged with a transceiver and decoder, emits a signal activating the RFID tag so it can read and write data to it. When an RFID tag passes through the electromagnetic zone, it detects the reader's activation signal. The reader decodes the data encoded in the tag's integrated circuit (silicon chip) and the data is passed to the host computer for processing.

RFID tags come in a wide variety of shapes and sizes. Some tags are easy to spot, such as the hard plastic anti-theft tags attached to merchandise in stores. Animal tracking tags which are implanted beneath the skin of family pets or endangered species are no bigger than a small section of pencil lead. Even smaller tags have been developed to be embedded within the fibers of a national currency.

While barcodes have historically been the primary means of tracking products, RFID systems are rapidly becoming the preferred technology for keeping tabs on people, pets, products, and even vehicles. One reason for this is because the read/write capability of an active RFID system enables the use of interactive applications. Also, the tags can be read from a distance and through a variety of substances such as snow, fog, ice, or paint, where barcodes have proved useless.

Currently, RFID tags are not widely used in consumer products because the price of the tags is still prohibitively expensive. However, as companies push for enhanced means of tracking products and profiling consumers, the increased demand and production of RFID technologies will drive down prices. Already, developments in RFID technology are yielding systems with larger memory capacities, wider reading ranges, and faster processing. In response, the market for RFID tags is growing explosively, projected to reach $10 billion annually within the decade.

RFID systems have gained popularity, and notoriety, in recent years. A driving force behind the rapid development of RFID technology has been the rise of pervasive commerce, sometimes dubbed the quiet revolution. Pervasive commerce uses technologies such as tracking devices and smart labels embedded with transmitting sensors and intelligent readers to convey information about key areas where consumers live and work to data processing systems. To gather this data, retailers can choose from a range of options.

RFID systems may be roughly grouped into four categories:

These RFID systems enable business owners to have real-time access to inventory information, as well as a broader, clearer picture of consumers' buying habits. RFID technology also enables retailers and corporations to peek into the lives of consumers in ways that were, until recently, off limits. Products embedded with RFID tags can continuously transmit information ranging from an electronic product code (EPC) identifier, to information about the item itself, such as consumption status or product freshness. Data processing systems read and compile this information, and can even link the product information with a specific consumer.

This composite information is vastly superior-and more invasive-than any data that could be obtained from scanning bar codes, or even loyalty cards. Frequent shopper cards link consumers to their purchases, but this limited information gives retailers only a narrow view of a consumers' in-store purchasing trends. In contrast, RFID systems enable tagged objects to speak to electronic readers over the course of a product's lifetime-from production to disposal-providing retailers with an unblinking, voyeuristic view of consumer attitudes and purchase behavior.

The future of RFID technology

Currently, RFID technology is still too expensive to be used by retailers en masse. The cost per electronic tag now stands at about 30 cents apiece, but is expected to fall to as little as three cents in the next three years. RFID tags will probably not become pervasive until the per chip cost dips below one penny. Retailers will still have to purchase sensors to read the tags, which can cost $1,000 each.

In spite of the costs, some retailers are willing to pay the price for the insight RFID tags provide into the lives of consumers. Over the next few years, industry experts expect to see a broad range of RFID pilots, and even several fully integrated systems, launched. A handful of corporations have already signed on, and are moving ahead with plans to embed products with RFID tags. Recently, Microsoft Corporation announced that it would develop software that will enable retailers, manufacturers, and distributors to use RFID tags to track goods within stores and factories, as well as programs specifically designed to use the new retail tagging technology.

Other proposed uses of RFID technology include:

While corporate giants tout the merits of RFID technology, civil liberties advocates point out that the ability to track people, products, vehicles, and even currency would create an Orwellian world where law enforcement officials and nosy retailers could read the contents of a handbag-perhaps without a person's knowledge-simply by installing RFID readers nearby. Such a fear is not unfounded. Currently, some RFID readers have the capacity to read data transmitted by many different RFID tag. This means that if a person enters a store carrying several RFID tags-for example, in articles of clothing or cards carried in a wallet-one RFID reader can read the data emitted by all of the tags, and not simply the signal relayed by in-store products. This capacity enables retailers with RFID readers to compile a more complete profile of shoppers than would be possible by simply scanning the bar codes of products a consumer purchases.