All EPIC Publications are available in softcover only, unless otherwise noted. 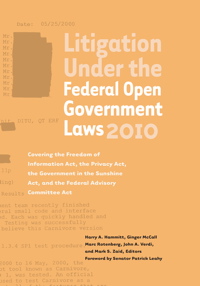 Litigation Under the Federal Open Government Laws, published by EPIC in cooperation with Access Reports and the James Madison Project, is the standard reference work covering all aspects of the Freedom of Information Act, the Privacy Act, the Government in the Sunshine Act, and the Federal Advisory Committee Act. The book draws upon the expertise of practicing attorneys who are recognized experts in the field. Appendices include the text of the relevant acts and sample pleadings for litigators. This is a comprehensive guide to FOIA and open government, essential for anyone interested in open access laws. The 25th edition includes updates on international open government resources, a glossary of key terms, and new significant cases. 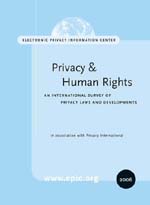 This annual report by EPIC and Privacy International provides an overview of key privacy topics and reviews the state of privacy in over 75 countries around the world. The report outlines legal protections, new challenges, and important issues and events relating to privacy. Privacy and Human Rights 2006 is the most comprehensive report on privacy and data protection ever published. 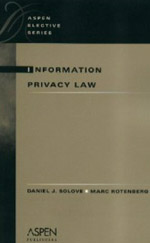 The text is complemented with excellent print and Web teaching support, with a Teacher's Manual containing sample syllabi, case commentaries, and extra case materials - plus Author's Website for new material and regular updates on relevant cases and legislation. For your next privacy law course, review the book with the authorship and currency to meet your needs - Information Privacy Law.

The Privacy Law Sourcebook is updated and expanded for 2004. New materials include the APEC Privacy Framework, the Video Voyeurism Prevention Act, the CAN-SPAM Act, and reports from the Article 29 Working Group on data protection issues related to intellectual property rights, radio frequency identification, enforcement, and spam. Also included is an extensive section on privacy resources with useful Web sites and contact information for privacy agencies, organizations, and publications.

The Public Voice WSIS Sourcebook: Perspectives on the World Summit on the Information Society (EPIC 2004) 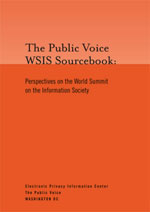 The Public Voice WSIS Sourcebook has been compiled to further a dialogue on the issues, the outcomes, and the process of the World Summit on the Information Society (WSIS). Beginning in 2003 and continuing through 2005, the UN WSIS will seek the views of national governments, private sector organizations and civil society, on the opportunities presented by information and communications technologies. This publication is intended to promote understanding of the WSIS and encourage greater civil society participation in the current phase of the Summit.

The WSIS Sourcebook includes the official UN documents, regional and issue-oriented perspectives, as well as recommendations and proposals for future action. The Public Voice WSIS Sourcebook also provides a useful list of resources and contacts for individuals and organizations that wish to become more involved in the WSIS process.

Filters and Freedom 2.0 examines how Internet filtering and rating systems relate to freedom of expression. Originally proposed as a technological solution that would forestall official censorship, content filtering has been shown to pose its own signicant threats to free expression on the Internet. Often characterized by their proponents as mere features or tools, filtering and rating systems can also be viewed as fundamental architectural changes that may, in fact, facilitate the suppression of speech far more effectively than national laws alone ever could. This newly revised edition addresses recent developments, including new content control legislation in the United States, efforts within the European Union to establish a uniform rating regime for online material, and the growing controversy over the use of filtering in public libraries. Partly as a result of the writings contained in this collection, the headlong rush toward the development and acceptance of filtering and rating systems has slowed. These critical views must be considered carefully if we are to preserve freedom of expression in the online world.

In Cryptography and Liberty 2000, the Electronic Privacy Information Center (EPIC)'s third survey of encryption policy around the globe, EPIC finds that the effort to reduce export regulations that limit the availability of encryption has largely succeeded. The rise of electronic commerce and the need to protect privacy and increase the security of the Internet have resulted in the development of policies that favor the spread of strong encryption worldwide. However, while the impact of export controls on the use and production of encryption continues to diminish, new domestic regulations and new powers for law enforcement authorities raise ongoing questions about the freedom to use encryption and other privacy enhancing techniques. 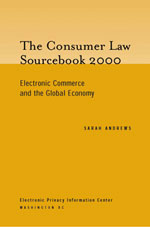 The Consumer Law Sourcebook provides a basic set of materials for consumers, policy makers, practitioners and researchers who are interested in the emerging field of electronic commerce. The focus is on framework legislation that articulates basic rights for consumers and the basic responsibilities for businesses in the online economy. The Sourcebook includes the text of many of the major consumer laws and directives such as the Anticybersquatting Consumer Protection Act, the Electronic Signatures Act, the Electronic Fund Transfer Act, the Federal Trade Commission Act, OECD Consumer Protection Guidelines, European Union Directives on Electronic Commerce, Electronic Signatures and Distance Contracts, and more. Also included is a list of consumer resources with contact information for consumer agencies and organizations and links to useful publications and reports.

Titles by EPIC Advisory Board members:

From Gutenberg to the Global Information Infrastructure: Access to Information in the Networked World

"A serious and multidimensional account of the challenge of connecting people and information on global networks."
- Phil Agre, Department of Information Studies, University of California, Los Angeles

Beyond Fear: Thinking Sensibly About Security in an Uncertain World

"This extraordinarily clear and powerful analysis by the leading thinker in security of our time gives everyone - from policymakers to citizens - a way of understanding, and resolving, one of the mores important issues facing society today."
- Lawrence Lessig, Stanford Law School

"...a clear, comprehensive guide that puts the wide range of digital threats in context. The ultimate knowledgeable insider, Schneier not only provides definitions, explanations, stories, and strategies, but a measure of hope that we can get through it all."
- Steven Levy, author of Hackers and Insanely Great

"The erosion of privacy is of concern to all Americans. This book provides a valuable framework for readers of many disciplines and will clarify the issues we need to address."
- Caroline Kennedy, co-author of The Right to Privacy